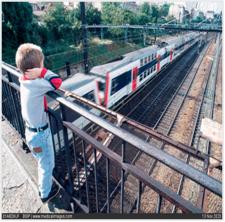 This was always identified as a problem issue when the original HS2 plans were made public. As part of the House of Commons approval process HS2 gave assurances on the noise of the trains. However it is now clear that unless some plans change the noise will be excessive and this is becoming a major issue that needs addressing.

Here's the three issues that we need your help with.

We're expecting the designs to be submitted for approval in 2021, so time is short to get changes included. So can you please help by telling us what you think about the options?

Please give us your opinion in the Survey.

So what has gone wrong? We have identified three factors (click on the hyperlinks below to see the detail we have compiled on each of the individual issues).

These three factors combined mean that they will find it increasingly difficult to keep to the promised levels, in fact the noise that will be produced exceeds the World Health Organisation night time limits of 60db which will impact many residents trying to sleep, and shatter the peace of Wendover. We think it's in everyone's interests to address the issue with additional mitigation now, as it will become very difficult to sort this out later.

The problem also is that it's not just an occasional noise, about 36 trains per hour are scheduled to run during the daytime and 60 in total at night, so is a continual impact on daily life.

We have done a number of 'technical reports' about this issue that we have used in discussions with people involved which you can read (see Documents in the main menu above).

In order to deal with this problem HS2 seem to have considered three options - to do nothing and expect us to just live with it, to slow the trains down or to increase further the size of the trackside barriers to up to 10 metres high. We can't see anyone in Government agreeing to slow the trains down, (the whole point is its 'High Speed'). Higher barriers would be highly effective and could be painted to blend in with the local landscape.

We have been looking at options and come up with two suggestions we have been discussing with the parties involved.

At the Northern end of Wendover there is a cutting as the line emerges from the Green Tunnel. The design proposed by HS2 has shallow slopes, which would be similar to the 2018 EK proposal near Leather Lane.

The disadvantage of this design is the limited noise reduction, which would impact the Lionel Avenue/Dobbins Lane area.

We are proposing that the line is redesigned as a 'Retained Cutting', which has a near vertical wall on the east side that can act as a noise barrier; reflecting the sound upwards and away from the local housing area. 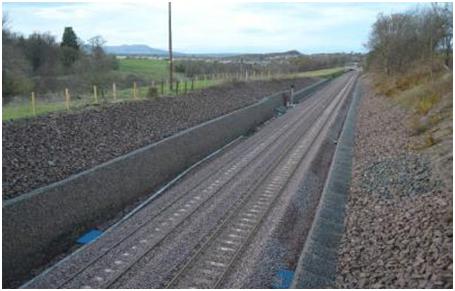 This would probably use precast concrete sections, similar to the approach expected for the lining of the Green Tunnel. Having walls finished with a rough texture also helps absorb the noise energy, so the picture right shows what the line could look like in a retained cutting. 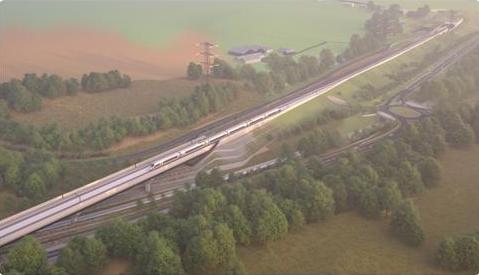 At the southern end of the Green Tunnel the HS2 design includes 6 metre high barriers on the Small Dean Embankment, next to the Wendover Bypass. These barriers are landscaped so that only the tops are visible.

Where the track crosses the A413 the Small Dean Viaduct is also provided with 1.4 metre high barriers. 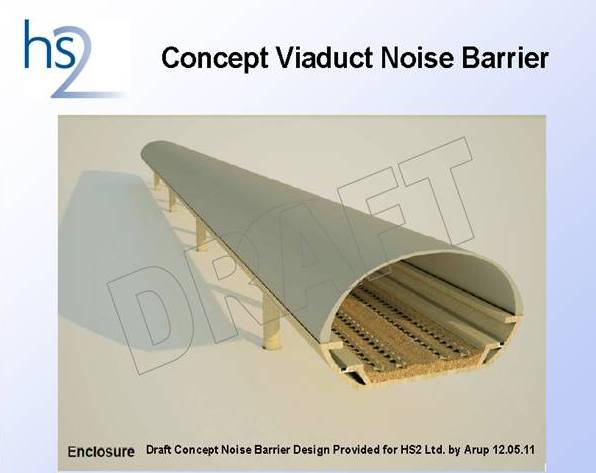 Reducing the noise for South Wendover means there will have to be some form of taller barriers up on the viaduct and the embankment. Here the optimum solution of an 'arched' barrier (originally suggested to HS2 by the Arup Noise consultants in 2011) is shown in the photo left.

Since that time the technology has been refined and is in use on high speed lines in China. 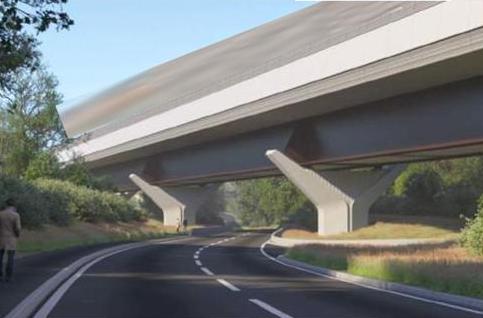 An alternative, but less effective solution would be to use traditional vertical noise fence barriers, but simply make them taller than the current concrete walls design.

The picture left shows how a taller barrier would also hide the overhead line equipment. 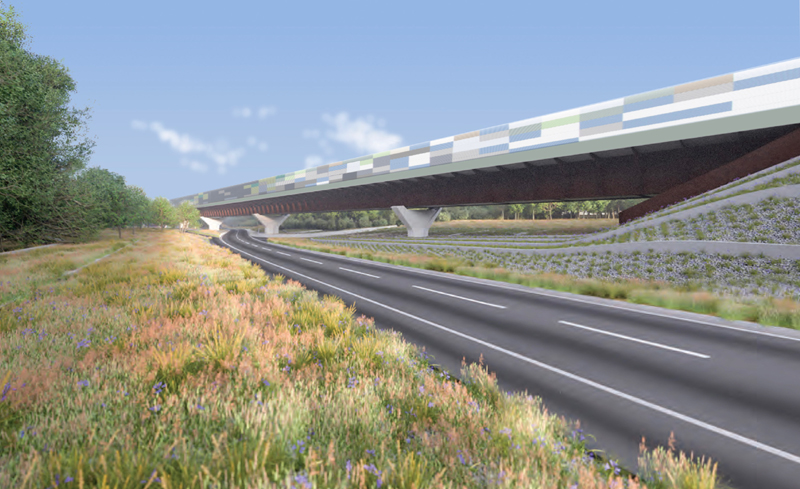 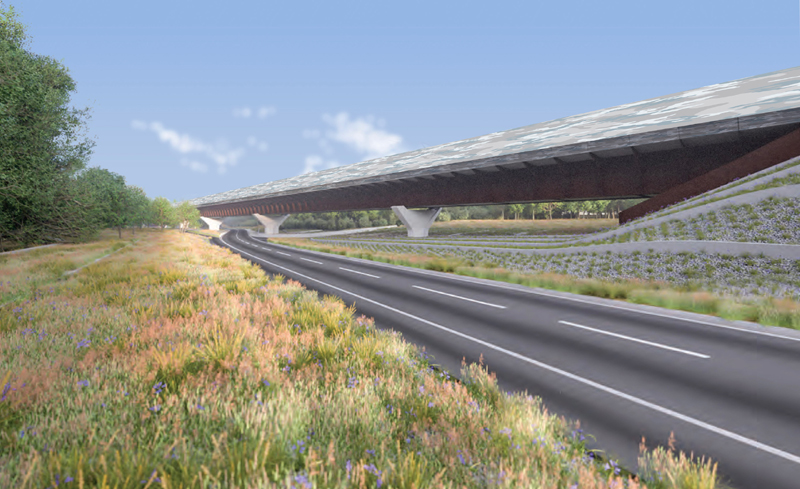 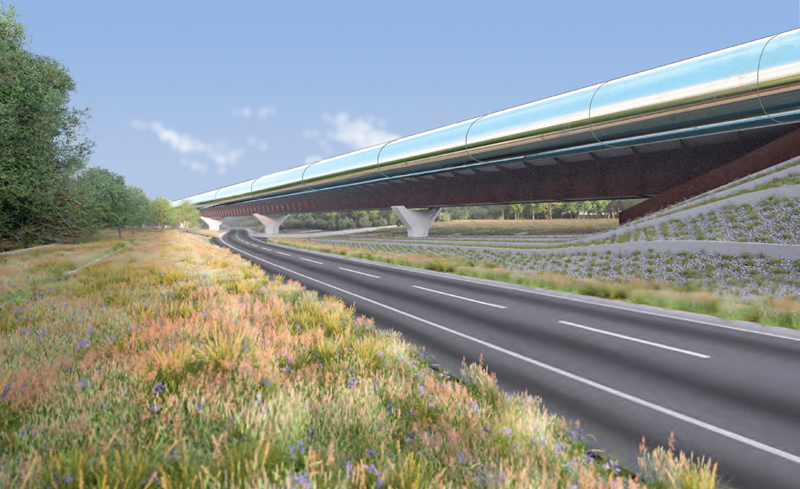 Putting a large structure like this on the Small Dean Viaduct could be handled with different design approaches.

The picture right shows how an arched barrier could be made as an eye catching feature, making the underlying steel girders less obvious when seen from the A413.

Two alternatives can be seen by holding your mouse over this image for about 10 seconds. The first could be to camouflage paint the barrier, which would help it blend in with the surrounding area. The second shows how taller noise fences built from standard panels (as used in other High Speed Rail networks) could be camouflaged.

An arched barrier or taller fences could also be used on top of the Small Dean Embankment. Here the visual impact could be reduced, hold your mouse over the picture left to show how the existing 6m high barriers are disguised by landscaping. The proposed taller barriers would not be noticeable from the bypass or Coombe Hill if the height of the landscaping was also increased.

As we hold meetings with HS2 and others, we put forward our case and gather more information, so please watch this website for updates.

What's your view? We need some input so we can represent your view as Wendover residents.